This is the first in a series of three articles about ideas for implementing full support for group commit in MariaDB (for the other parts see the second and third articles). Group commit is an important optimisation for databases that helps mitigate the latency of physically writing data to permanent storage. Group commit can have a dramatic effect on performance, as the following graph shows: 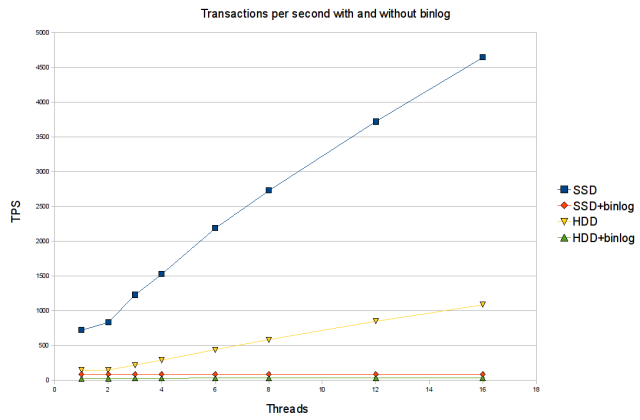 The rising blue and yellow lines show transactions per second when group commit is working, showing greatly improved throughput as the parallelism (number of concurrently running transactions) increases. The flat red and green lines show transactions per second with no group commit, with no scaling at all as parallelism increases. As can be seen, the effect of group commit on performance can be dramatic, improving throughput by an order of magnitude or more. More details of this benchmark below, but first some background information.

In a fully transactional system, it is traditionally expected that when a transaction is committed successfully, it becomes durable. The term durable is the “D” in ACID, and means that even if the system crashes the very moment after commit succeeded (power failure, kernel panic, server software crash, or whatever), the transaction will remain committed after the system is restarted, and crash recovery has been performed.

The usual way to ensure durability is by writing, to a transactional log file, sufficient information to fully recover the transaction in case of a crash, and then use the fsync() system call to force the data to be physically written to the disk drive before returning successfully from the commit operation. This way, in case crash recovery becomes necessary, we know that the needed information will be available. There are other methods than fsync(), including calling the fdatasync() system call or using the O_DIRECT flag when opening the log file, but for simplicity we will use fsync() to refer to any method for forcing data to physical disk.

fsync() is an expensive operation. A good traditional hard disk drive (HDD) will do around 150 fsyncs per second (10k rotation per minute drives). A good solid state disk like the Intel X25-M will do around 1200 fsyncs per second. It is possible to use RAID controllers with a battery backed up cache (which will keep data in cache memory during a power failure and physically write it to disk when the power returns); this will reduce the overhead of fsync(), but not eliminate it completely.

(There are other ways than fsync() to ensure durability. For example in a cluster with synchronous replication (like NDB or Galera), durability can be achieved by making sure the transaction is replicated fully to multiple nodes, on the assumption that a system failure will not take out all nodes at once. Whatever method used, ensuring durability is usually signficantly more expensive that merely committing a transaction to local memory.)

So the naive approach, which does fsync() after every commit, will limit throughput to around 150 transactions per second (on a standard HDD). But with group commit we can do much better. If we have several transactions running concurrently, all waiting to fsync their data in the commit step, we can use a single fsync() call to flush them all to physical storage in one go. The cost of fsync() is often not much higher for multiple transactions than for a single one, so as the above graph shows, this simple optimisation greatly reduces the overhead of fsync() for parallel workloads.

Group commit in MySQL and MariaDB

MySQL (and MariaDB) has full support for ACID when using the popular InnoDB (XtraDB in MariaDB) storage engine (and there are other storage engines with ACID support as well). For InnoDB/XtraDB, durability is enabled by setting innodb_flush_log_at_trx_commit=1.

Durability is needed when there is a requirement that committed transactions must survive a crash. But this is not the only reason for enabling durability. Another reason is when the binary log is enabled, for using a server as a replication master.

When the binary log is used for replication, it is important that the content of the binary log on the master exactly match the changes done in the storage engine(s). Otherwise the slaves will replicate to different data than what is on the master, causing replication to diverge and possibly even break if the differences are such that a query on the master is unable to run on the slave without error. If we do not have durability, some number of transactions may be lost after a crash, and if the transactions lost in the storage engines are not the same as the transactions lost in the binary log, we will end up with an inconsistency. So with the binary log enabled, durability is needed in MySQL/MariaDB to be able to recover into a consistent state after a crash.

With the binary log enabled, MySQL/MariaDB uses XA/2-phase commit between the binary log and the storage engine to ensure the needed durability of all transactions. In XA, committing a transaction is a three-step process:

The idea is that when the system comes back up after a crash, crash recovery will go through the binary log. Any prepared (but not committed) transactions that are found in the binary log will be committed in the storage engine(s). Other prepared transactions will be rolled back. The result is guaranteed consistency between the engines and the binary log.

Now, each of the three above steps requires an fsync() to work, making a commit three times as costly in this respect compared to a commit with the binary log disabled. This makes it all the more important to use the group commit optimisation to mitigate the overhead from fsync().

But unfortunately, group commit does not work in MySQL/MariaDB when the binary log is enabled! This is the infamous Bug#13669, reported by Peter Zaitsev back in 2005.

So this is what we see in the graph and benchmark shown at the start. This is a benchmark running a lot of very simple transactions (a single REPLACE statement on a smallish XtraDB table) against a server with and without the binary log enabled. This kind of benchmark is bottlenecked on the fsync throughput of the I/O system when durability is enabled.

The benchmark is done against two different servers. One has a pair of Western Digital 10k rpm HDDs (with binary log and XtraDB log on different drives). The other has a single Intel X25-M SSD. The servers are both running MariaDB 5.1.44, and are configured with durable commits in XtraDB, and with drive cache turned off (drives like to lie about fsync to look better in casual benchmarks).

We see that with one thread, there is some overhead in enabling the binary log, as is to be expected given that three calls to fsync() are required instead of just one.

So this concludes the first part of the series. We have seen that if we can get group commit to work when the binary log is enabled, we can expect a huge gain in performance on workloads that are bottlenecked on the fsync throughput of the available I/O system.